I do NOT wear a pocket protector

Alright, I have been known to be, how you say, less than a fashion conscious person over the years.  In jr. high school my wardrobe consisted of giant bell bottom jeans and tee shirts with iron-on decals depicting motocross bikes, trucks, or that infamous green monster flipping the bird.  Yes, I actually wore that to school.  What can I say?  My dad was frugal and he let my brother and I wear pretty much whatever we wanted, and, my brother was better at this than I was, but I would even get a hair cut every couple of years.

Now, I’d like to think that my fashion sense has, for the most part, anyway, improved somewhat over the years and when it comes to work, there is as certain standard that is required of me.  Business, or business casual is the norm for most employees in my office, but I will be the first to admit that I exhibit some slight geek tendencies in that I typically carry a 4″X6″ note pad in my shirt pocket along with a pen.  I also, as many of my peers with which I share the first digit of my age will attest, now find it necessary to use reading glasses in order to focus on small print, and because of this, I keep a pair of readers in my shirt pocket along with my aforementioned essentials.

A couple of co-workers (who will remain nameless, but you know who you are) have been getting on my case about the conglomeration of stuff that I pack into my shirt pocket at work and have dubbed my eyeglass case as a pocket protector.  I deny this misinterpretation with fervor and I attest that I do NOT wear a pocket protector.  It is an eyeglass case that is occupying the same space as my writing tablet and pen; items that one might place into a pocket protector if they were so inclined to wear one, which, I am not.

One day, one of these two co-workers, who claims that he is only looking out for my best interests, stopped by my workstation under the guise of speaking to me on some work related topic or another and, unbeknownst to me, he snapped a photo of me and my overloaded pocket reflecting in the mirror by my desk. 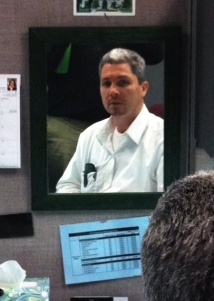 I was oblivious to this assault, as this particular co-worker is never without his phone.  He can be seen throughout the day with his I-Phone grasped in a death grip in his hand, his head craned at a near perfect 30 degree angle as he traverses the corridors of our office blindly, guided through doorways and stairwells apparently by some hidden eye or video GPS device affixed to the top of his head.  Ya got an app for that?

So, anyway, I thought nothing of it when he was standing at my workstation addressing his concerns about the malfunctioning copier upstairs with his phone in his hand.

The efforts by this employee to get me to abandon my practice of cramming all this stuff in my shirt pocket has not been in vain.  I have now limited my use of my reading glasses.  I have since realized that I just don’t need them nearly as much as I previously thought.  The battle over my notepad and pen, however, goes on.  I will continue to keep a notepad and pen in my pocket because I use it for various personal and professional purposes.  I write.  I take notes on writing prompts or other subject matter that I deem valuable to a future story idea.  I am also a photographer.  When I see spy an intesting subject that I would like to photograph within the 40 square blocks of Downtown Sacramento, the area that I typically walk going to and from the bus, and my daily errands, Ill jot it down and revisit it later.

Maybe I’ll adopt the suggestion of this concerned citizen, who proclaims to only have my best interests in mind, and carry these items in my pants pocket instead, keeping my geeky note-taking habits hidden from the world at large.  But then, what would I do with all the junk I keep in those pockets?

Whatever the final result of this issue that has recently been brought to my attention, I stand my ground in saying:  That is NOT a pocket protector.