Lies, lies I tell you! My GPS running app is telling lies!  Forgive me for posting another running related blog entry, but it seems that that is all I am filling my spare time with of late (that and writing these posts) and my experiences the past few times out have proven worthy of discussion. Or perhaps I am just venting… No matter. I’m maintaining a healthy balance of regular physical activity and sitting on my duff writing, so it’s all good, right?

Ok, now I am all for giving credit where credit is due, and when my GPS app decided to spoon feed me back some of the precious minutes and miles that it systematically robbed me of over the past two years, it was tempting to just say, OK, sweet; I’ll claim that as my own. I mean, who’s going to know, right? Well, that’s just not how I roll for a couple of reasons. First and foremost, I am an honest person and I don’t claim that which is not mine. It’s like if someone visited my photography web site (jeffreyjohnstonphotography.com), and decided, hey… that picture’s purdy. I think I’ll save it to my computer and use it as my new wallpaper and I’ll tell people that I took it. No… that is NOT OK.

OK, OK. I’m stepping down from my soap box now, but the point that I am trying to make here is that it is not OK to claim that which is not yours, even if it is something as rudimentarily trivial as un-earned mileage, time, and corresponding pace while running. Yes, who’s going to know? Me, that’s who, and we all know the saying “oh what a tangled web we weave, when once we practice to deceive.” The bottom line is, who are we fooling most? Ourselves. So I keep it honest. Momma told me this was best.

That is not to stay that I haven’t over my lifetime lost my way, trekked a few miles down the road to the dark side, we all have at some point in our lives. In fact, one time in particular still resonates with me because it caused me so much shame, yet I never took corrective action to see to it that the truth be known. When I was in pre-school. I know, you’re probably saying: “Dude, really? Preschool?” Yes. We lived in Chico California and my father was attending college. I was in preschool and there was an art project assigned to us in which we each were to draw a picture of a Christmas Tree, decorated with bulbs, lights and whatever else we thought a Christmas tree should look like in pre-freedom of religious expression sensitivity 1968. At the age of four, my artistic abilities were rather limited and were obviously far inferior to that of the girl to my immediate right of me at the table we were working on. So, in effort to secure the highest accolades and win over my teacher, I swapped out my crummy tree with my neighbors when she got up to get more paste to eat. She was always eating paste… loved the stuff, and her addiction to the tasty mixture of flour and water was clearly to my benefit on that particular day. An acquired taste, this paste; one which I could never quite wrap my young mind around.

So, anyway, I claimed my neighbor’s artwork as my own, slapped my name on the back in a scarcely legible four-year-olds crayon scrawl, and turned it in. How this fraudulent crime was not discovered is beyond me, perhaps the rightful owner was so stoned on paste that she just didn’t notice that her once Rembrandt caliber work of art had vanished and was replaced with my barely recognizable work of crap.

That work of art, immorally attained as it was, still adorns my late grandmothers scrap book. Shameful, I know. I did confess to this act of blatant thievery and dishonesty to my mother thirty or forty years later, though. At least I think I did. Confession or not, it was wrong. I knew it then, but just didn’t have the courage to do anything about it at the time. Whew…I feel so much better now that that is off my chest. Sorry, Grandma. I never came clean with that while you were here.

Sure, I think that many of us have embellished on the truth a bit in order to tilt the scales of achievement in our favor for one reason or another. However, for me, the days of dishonesty, no matter how seemingly insignificant are over. Oh yeah… if anyone looks closely enough at the splits on this particular run (pictured below) it will become quite evident that at one point around mile #2 my trajectory magically leapt from 13th & N to 9th & E in the matter of seconds, and then deposited me briefly at 11th & J before magically circumventing about a half mile of my route and continuing on my original course. One will also notice that my pace for mile #2 was a lightning-fast 1:13 minute mile. What! That’s just crazy! I have never run that fast, even on a good day with plenty of Starbucks and C4 coursing through my veins, this middle aged novice runner is just not that fast, nor do I aspire to be. For if I were, I fear that I would surely be found on the pages of a comic book, hanging among the ranks of Flash, or recruited by local law enforcement to chase down bad guys, or perhaps become the next celebrity star of the Olympic track team earning well deserved gold for our country. Ahh, yes. I can see it now. Fame, fortune, celebrity status. Uh… No. Alas I am just some old guy trying not to die prematurely because he sat in front of the TV watching re-runs of shows that he already saw thirty years earlier instead of getting outside moving around a little each day. 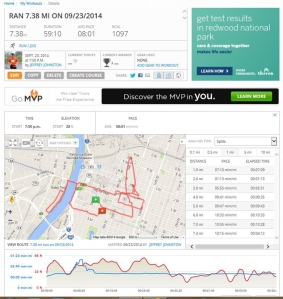 As I post these little running route screenshots, I have to believe that some of my keen-eyed blog followers, whether skeptical of my claims or honestly interested in my fitness aspirations, are clicking on the actual route on MapMyRun.com and examining my splits for both accuracy and my correlating scrupulousness. Yeah, that’s the other reason for the honesty… it’s traceable, and no one wants to earn the objectionable reputation of reporting falsehoods as it pertains to performance in fitness achievements or anything else, for that matter. With that said, GPS is not a perfect science, as is evident with the errors which are the basis of this particular post, but there are limits to that which is deemed a feasible margin for error, the apparent teleportation over several city blocks and logging an implausible 1:13 minute mile pace during an evening run, notwithstanding.

I embarked upon this run in full faith that my consistency-lacking GPS running app, coupled with my circa 2005 smart phone, its actual intelligence rightfully disputable, would, at least start at the same time that I started running and at least provide me with a relatively accurate reporting of distance, time and pace. I don’t know what happened. Alien interference, perhaps? Solar flare? Who really knows for sure? I know what distance I ran that night, as it is a route I have run before and shaving about 1.5 miles off of my distance, and adding a couple of minutes to my pace, is a relatively fair representation of my actual performance on this night fueled by mystery and intrigue… and apparently, my newly-acquired supernatural powers.

May your momentum be perpetual, and your integrity held high, my friends!