A new year is upon us and with the new year comes more resolutions that, lets face it, most of us, while making a valiant effort to keep seem to fall short or are all too eager to abandon altogether.  A guy I know at work I think said it best when he said that for him there will be no resolutions for the new year, just results.

I have to admit that I have never been one to make New Year resolutions because it seems that once one voices their aspirations of positive changes in their lives and obligate themselves to initiate this change on a specific date they are doomed to failure.  With that said, I am taking a proactive role in making positive changes in my life, and yes, I am embarking on my quest for enlightenment on the first day of 2011 (today).  This blog post is part of that venture which will include more of the same.  I am keeping it simple though.  No major hurdles.  Just keeping a firm grasp on personal passions and wellness.  It’s all about me and what keeps me being me.

I know, my blog posts are supposed to include some photography to associate to the topic, but I didn’t get out last night to photograph any New Years festivities or fireworks, so you’ll have to settle for these photos depicting what I did last summer.  And you say I never take you anywhere.

Wishing us all a New Year full of Health, Happiness and new opportunities!

Did you see it?  I did, and let me tell you, it was pretty cool!  I have wanted to capture a lunar eclipse since I bought my first DSLR and tonight I was not disappointed.  Granted, I did only document the penumbra state through when the last of the moon entered the umbra at the point that the total eclipse began at around midnight.  By that time it was 47 degrees in my backyard and I had been craning my neck peering through my tripod mounted camera and 500mm lens at nearly a vertical angle for an hour and a half on a work night.

It was a wonder that the clouds parted for this event as the skies for most of the day were dark with much of the day fully engulfed in scattered rain showers.  I figured that the clouds parted for a reason and I wasn’t going to miss this opportunity to document the only full lunar eclipse to occur on the winter solstice in my lifetime.  The last one to occur on this date was on December 21, 1638.  The next one is not due until December 21, 2094 according to NASA.

Alright, enough suspense.  Here is a slide-show with 8 of the 112 photos that I took between 10:33 and 12:00 midnight on December 20, 2010.  Post a comment and let me know your experience with this or a past eclipse event or just give me some feedback.

Ghosts in a Stockton Cemetery (do you see what I see?)

Do you believe in ghosts?  Well, who doesn’t, to a certain degree, right?  OK, maybe not everybody has had an otherworldly “experience”, and you’re probably thinking; “hey, this guy is nuts.  I thought his blogs were about photography and junk like that”. Well, they are, and before you get your panties in a bunch, just let me explain.  I, for one, have never really had a strong belief in ghosts, goblins goulies, or whatever, or, for that matter, nor have I ever had an experience that I could, or would remotely call a “ghostly” experience.  That is, until one day in 2004 when I bought my first digital SLR camera and decided to field test it in a cemetery near my home.  “ooohhwiiiooo”  (that’s my feeble attempt at phonetically typing out the eerie spaceship sound that we have all heard in cheesy black and white movies, you know, like on that one episode of The Brady Bunch where Peter plays a trick on his siblings by projecting a space ship onto a sheet strung between two trees in his back yard and makes that eerie sound by blowing into that phony whistle contraption)  Or was it Greg.  I know, I know , Who gives a flyin poo, poo, right?

Anyway, back to why I sat down and began pounding away on my laptop so late on a work night.  Back in 2004 I was testing my new camera in the Stockton Rural Cemetery and fired off a couple hundred photos before heading home to download them to my computer.  They all came out pretty good and I didn’t think much of them again until about a year later when my wife’s cousin’s daughter (does that make her my neice-in-law?)  I know, your right; WTF, who gives a crap!  Get back to the story, would ya!  I promise there are gonna be some photos, OK?  Keep your pants on.

So, anyway, Julie (Sup, Julie!  Holla, Whoop, Whoop!) tells me about this Web site called ghoststudy.com.  Ghoststudy is a site where people can upload photos that they have taken of everyday stuff which at the time the photos were taken, they saw nothing out of the ordinary in them, but upon closer inspection, people noticed weird shit that they didn’t see before like faces peering through doorways, or transparent figures walking around, you know, ghostly stuff.  If the powers-that-be at Ghoststudy deem the photos authentic and creepy enough, they will post them on theire site for all to see.  So, I got the idea to take a closer look at all those cemetery pictures I took, and since they were high-resolution digital images I was able to zoom into each one really close to inspect every inch of them.  It took hours to go through them all, but when I was done, I had a couple of them that TOTALLY gave me the creeps.  Now, I promised photos, and they are coming up, but first let me explain that I am not going to point out what I think that I see in these images so that I do not taint this little project or prompt anyone to see what Ithought that I saw.  Although I confess to being quite proficiant in PhotoShop, all kidding aside, I did NOT alter these images in any way what-so-ever, nor did I fabricate anything in the photos.  With that said, take a look for yourself and if you see something wierd in either of these two sets of pictures, please leave me a comment on my blog and let me know what you think you see.

The first image is the one that took my breath away once I zoomed into it.  It’s an overgrown family plot that caught my attention because it was old, very overgrown and kind of sad that no one was around to keep the weeds down and maintain the plot.  I am going to post the original image and then the second image where I zoomed in to an area behind the plot.  You can click on the images to make them larger, but I don’t think that you’ll need to before you notice something a little freaky.  Do you see anything in the zoomed in image? 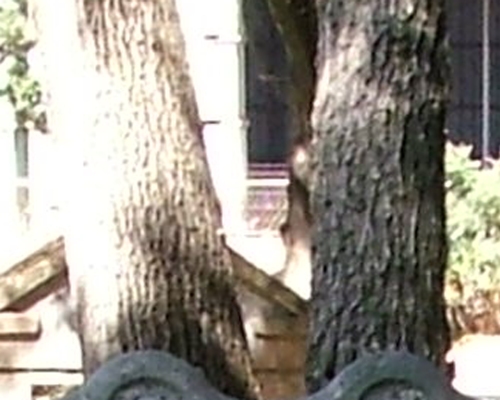 The next images are of an old Victorian mansion located near that same cemetery and is at the site where the old Stockton Insane Asylum once stood in the 1800’s.  (Now the site of the U.C. Stanislaus Campus)  This site has been in the news not once but twice when construction workers who were digging on the property doing renovations, unearthed a mass unmarked grave, each time yeilding about thrity sets of human remains.  The thought is that these were patients of the old asylum that had no family so when they died, they were taken out behind the buildings and just burried.  one of those mass graves was discovered only a couple of years after I took these photos.  The Victorian house is where the superintendent of the asylum lived.  The day that I took these photos I spoke at length to the head of security at this UC Stanislaus campus who had many ghost stories to tell, and even stated that she refused to go into some of the buildings on her patrol after reports of her staff experienceing cold spots, lights turning on and off on their own and even one guard who said that he was pushed after walking through a doorway that lead to the old mourgue.

The first photo is a wide shot of the house and in the second one I zoomed in on one of the windows.  It was said that the superintendent of the asylum, and as was the style of many of the men living in the mid 1800’s, had a thick black mustashe.  It must also be understood that at the time that these photos were taken, and even to this day, this house is empty.  It is not now, nor was it then occupied by anyone and while it was being restored around this time, no workers were inside the house when I took these photos.  I’m just sayin…  Look at the second photo and tell me… do you see what I see? 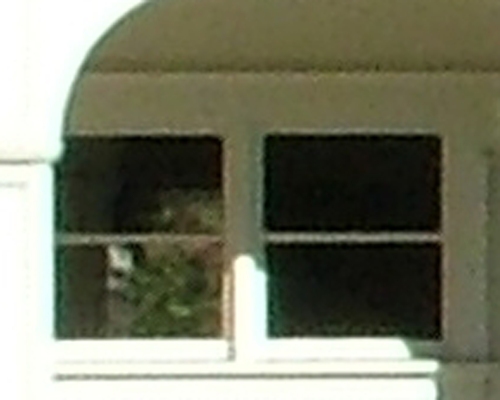 So, the next time that you are out taking photographs of historic buildings, cemeteries, ghost towns or other places that may have a tragic history, take a closer look at your photos.  You just might discover something in them that you did not see before.  Now,  back to my photos, I ask you; do you see what I see?  and if you do, then WHAT THE #@&*^! IS THAT!